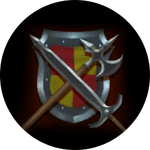 Most Warfare abilities are designed to be performed with medium and heavy melee weapons, including swords, great swords, blunt weapons and polearms. Most can be used holding a single weapon or dual-wielding, and some even swinging shields. This school also counts a few mobility skills that allow the warrior to charge into the fray and overwhelm the enemies with brute strength. Plus, it features multiple ways to intimidate opponents and raise the morale of allies in battle.

The power of most abilities belonging to this school depends on the Strength, Constitution and Charisma of the fighter.