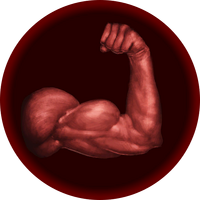 Strength is a measure of raw physical power, brute force, and endurance in combat. High strength allows a creature to endure longer fights. Additionally, it allows the creature to carry more weight before becoming burdened. Most melee weapons depend on the Strength of their user for their damage.

A character heavily focused on Strength wants to end a fight as quickly as possible with a small amount of devastating hits, stunning and knocking down its opponents, especially as it often lacks the physical and mental resources to sustain lengthy battles.

The following schools are affected by Strength to determine the effects of the skills:

Health base value is 750. Each point of Strength increases this amount by 50.

Health regeneration base value is 0. Each point of Strength increases this amount by 1.

Base = 30kg for Human players, but can vary depending on creature type.