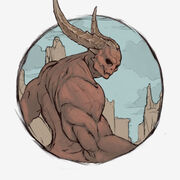 Hellfire Demons are a family of the Demon race in Fractured, banished to Tartaros after the Fracture.

Also known as Infernals, Hellfire Demons have gigantic, muscular bodies that endow them with inhuman strength and make them the creatures most feared by humans, beastmen, and other demons alike.

Hellfire Demons are skilled and powerful fighters, generally oblivious of trickeries and battle tactics, whose greatest love is to charge head-first whenever the occasion for a fight arises. Thanks to their innate affinity with fire, they can easily use any fire-related ability and are able to survive in extremely warm environments.

As further bonus to their battle prowess, their racial bonuses get stronger over the course of a tough battle, setting the thick veins that run through the skin of their bodies afire.