Fractured is heavily based around player crafting. Crafting or trading with other players is the only way to acquire new equipment, there is no random drop of equipment from mobs. The way crafting is implemented in Fractured is quite different from other sandbox games, and is strictly tied to cities and personal plots. First of all there is no concept of crafting/gathering skills, and any player could potentially craft all items and gather any kind of resources. What really limits a player is the availability of the facilities required to make such a craft. Those facilities can be built in a city which has developed the correct technology, or could be built in your own plot if your region has that technology.

All players have always access to all primitive crafts. Those are simple crafts which can be done without any facility, and include most types of weapons, some useful consumables like the bandages, arrows, some light armors and some medium armors. In general, these crafts make the player self sufficient and fully capable of playing even without access to a crafting station. To craft these items, simply open your crafting menu, select the item from the list and craft it. Most of the crafts in there only require branches, small stones and plant fibers. All of these resources are easily available. Branches can be taken from any tree, small stones are picked up from the ground and plant fibers are obtained by gathering any plant with large leaves, especially Flax plants. The only difficulty at times are the small stones, since they are well meshed with the ground texture and can be hard to spot the first times. An example of a primitive item is the Primitive Spear. 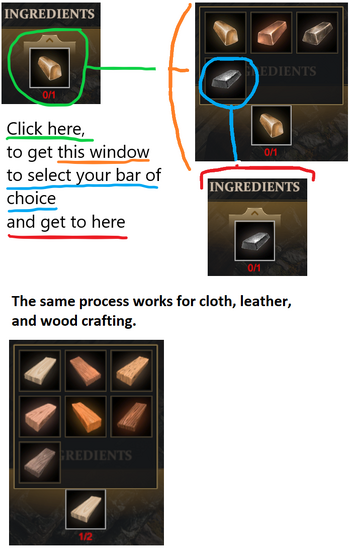 All crafts which require a crafting station are advanced crafts. These items offer a few advantages over the primitive ones. They typically have higher durability, there is a much wider range of equipment types, will get additional properties based on the materials that have been used for the crafting and can be further enchanted on an enchanting table. To craft one of such items, go to the appropriate crafting station and a crafting menu will open with all the items that can be crafted from that station. Once you find the item you want to craft, you have to select the material for it. To do this, simply click on the ingot/cloth/leather/wood shown as requirement, and you will be allowed to select a different material for it. The following picture illustrates this: 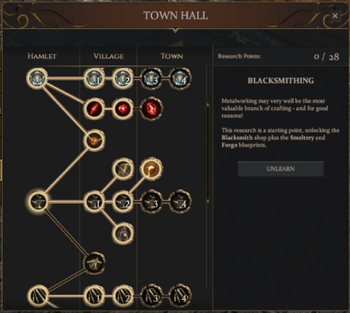 Every continent is divided in regions, and each region can have a city founded on it. If a region has an unclaimed city, a group of players can form a settler group of 20 players to claim it. Once the city is founded, it can start increasing in ranks (through gold and food) which will allow it to unlock new technologies in the tech tree. Some of these technologies will unlock new crafting stations and forges (which are used to produce the materials used in advanced crafting, like smelters and tanning tubes). Once a city unlock a technology, that technology will become available for all the plots in the region. 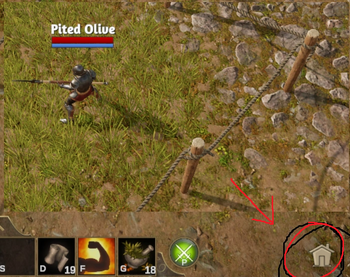 Once a city unlock the technology for a crafting station, it will also probably start building some inside the city. Depending on the decisions of the governor, those crafting stations can be:

A citizen is a player which has applied to join the city and which was accepted into it by the governor (or vice governor). They get access to all facilities, but are usually required to contribute to the city in some other way.

Alternatively, a player can get access to a crafting station even without the governor approval, and this is done by becoming a resident. If the player claims a personal plot in a region, he will get access to all the technologies of the city of that region. So he can build his own crafting stations on its plot.

To claim a plot, you have to find an unclaimed one (it will have ropes around it), and once you step inside an house icon will appear, allowing you to purchase that plot. The following image shows an unclaimed plot and the icon.