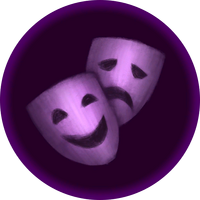 Charisma measures a creature attitude towards others, its inclination towards leadership, and its overall luck due to its firm positive mindset. Creatures with high charisma tend to spend much of their time in groups and parties, and their presence provides several bonuses to all their allies. Additionally, this attribute allows players to be much better at dealing with animals and other creatures, allowing them to tame the most dangerous pets.

Some say luck is blind, but knowing yourself and having faith in your abilities often helps a lot! Charisma is used by leaders and kings to raise among people, by minstrels to convey emotions to the souls of their audience, by tricksters to deceive their victims with illusions, and by trainers to earn the respect of their pets.

When chances between life and death depend on the throw of a dice, Charisma makes the difference, skewing the balance towards the best result.

Charisma also contributes to the total mana pool of the character.

The following schools are affected by the Charisma of the user to determine the effects of the skills:

Base = -400 for Human players, but can vary depending on creature type.

Assuming a random roll with a certain Chance to succeed (e.g. 25%, represented as 0.25), Biased Chance is the actual success chance altered by the player's Luck.

Base = 0 for Human players, but can vary depending on creature type.