The choices you make in this phase are impactful, since they have a strong effect on how well your character will do when dealing with different ability schools and combat scenarios. They’re also persistent, in that you won’t be able change your character’s race and attribute distribution in game – unlike what you can do with talents and abilities. 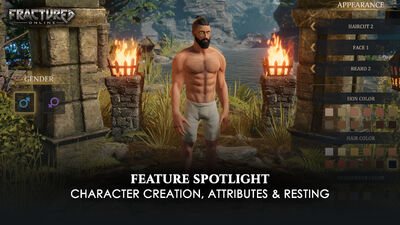 The choice of race is the most impactful you’re going to make in your Fractured Online experience. It determines on which planet you start your journey and the ruleset you’ll be subject to.

Other than that, different races – and families – come with a set of advantages and disadvantages such as unique abilities and backgrounds, basic statistic modifiers and attribute variations.

Once you’ve selected your race, it’s time you decided how to set your main character attributes: Strength, Dexterity, Constitution, Intelligence, Perception, and Charisma.

For starters, you’re given a pool of Creation Points that can be distributed among the six attributes – 80 if your new hero is a Wildfolk or a Demon, 100 if Human. Creation Points can be spent to increase your attributes from their minimum value of six (6) up to their cap, which normally is 18 but can change according to the character’s race and family (as shown in the table below, which lists cap variations by race). If the value of an attribute is below 10, you’ll suffer maluses to all the statistics related to it – that’s why it’s convenient to raise each up to 10, particularly for inexperienced players.

There is an important catch here though: the relation between Creation Points and attributes is not 1:1! On the contrary, the higher you want to increase an attribute, the more Creation Points you must spend. Moreover, each race and family (besides Humans) has an affinity with a specific attribute (highlighted in blue in the table above), which makes that attribute easier to increase. 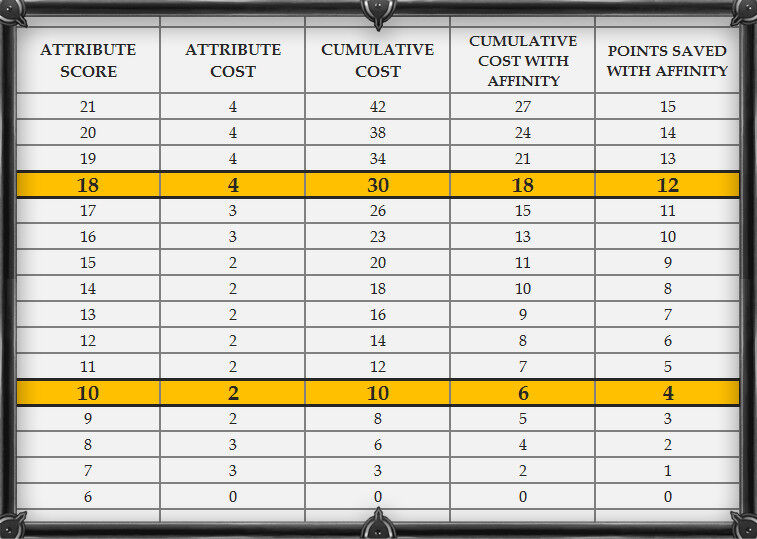 In this last step, you can choose the past of your character. Each kind of background grants you a different set of abilities already studied and sets you on a different path during the new character tutorial.

One thing worth noticing is that all character backgrounds available are pre-defined – you can’t choose the exact abilities you already know. This choice has been taken to make new heroes always start with a set of abilities that synergize properly with each other, allowing new players to have a more effective early game experience. Once your character learns new abilities and gains talent points, its background will no longer be significant anyway.

The resting mechanic is quite straightforward. When you start a resting phase, your character sits on the ground, and you are presented with a menu through which you can re-assign your talent points and choose the spells and abilities you want to memorize for your next adventure.

Resting involves no forced waiting time – once you’ve made your decisions, just confirm them and your hero will be ready to go. Moreover, it will have recovered all of its health and mana, and be cleansed of all negative status effects besides long-term curses and diseases.

There’s no limit to the number of resting phases you can take in a day – but of course they would lose all their strategic importance if you could have one at any time! That is why you can rest only in a safe location where your character can sit in front of a fire – be it your home, a friend’s mansion, a public tavern, or even campfire.