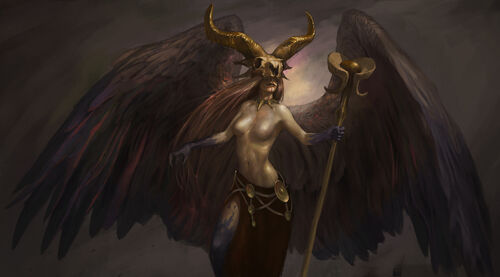 Babilis is one of the Gods from the Fractured universe.

Out of the six gods, Babilis is the only one that causes Karma loss when pledged to.

Babilis is Evil which means you can only choose from Lawful Evil, Neutral Evil or Chaotic Evil alignments after choosing Babilis as your God.

It is said that after the Fracture, Tartaros became the prison of the dread Babilis, left to be the only god watching over the planet and its demonic progeny.

Babilis, having desire for human blood, gifted Demons the ability to travel to other worlds more easily to bring terror to the other races.

The Evil God enjoys stacking curses on Wildfolk traveling to Tartaros, who could end up dying just because of them – if they don’t get slayed by Demons, that is.

Unlike Wildfolk, Humans are generally tolerated by Babilis, who sees a potential for corruption in them. While on Tartaros, they aren’t directly penalized like Wildfolk, but slowly lose Karma over time, unless they enjoy the protection of another God. Tyros, for instance, grants total immunity from the influence of Babilis – but of course, that comes at a price too. While the dark God is not able to reach their souls, it is more than willing to let its children do the dirty job!