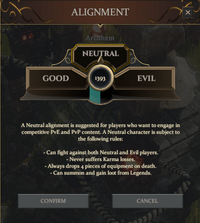 Alignment and Karma are a core system of Fractured's setting and game flow.

The three basic Alignments are Good, Neutral, and Evil. The concepts of Good and Evil in Fractured are objective and chiefly oppositional. It is not certain whether or not Fractured will include a second Lawful / Neutral / Chaotic axis as per Dungeons & Dragons.

An Evil alignment is the only option for players who want to engage in criminal behaviors against Good players, and is therefore heavily penalized. An Evil character is subject to the following rules:

A Good alignment is suggested for players who want the maximum degree of protection from hostile behaviors or only want to fight against criminals. A Good character is subject to the following rules:

A Neutral alignment is suggested for players who want to engage in competitive PvE and PvP content. A Neutral character is subject to the following rules:

It is not possible for Demons to gain Karma while on Tartaros.

While Resting, The player may choose either a Good, Neutral, or Evil Alignment, affecting their ability to steal from or attack other players, based on certain conditions.

If multiple conditions cause conflict, rule in favor of ❌s.

Each of the races in Fractured begins the game with a different Karma score.