Abilities in Fractured are grouped into different categories known as schools of magic and schools of fighting. This classification is both logical and practical in the UI of the game, but your hero is able to learn all the abilities in each school with no restrictions and in no forced order. Learning an ability requires a certain amount of Knowledge Points.

The schools do not represent the classic concept of "classes" in other MMOs. While spells belonging to the same school indeed share a common “theme” and often synergize with each other, you’re hardly meant to build your character using only one school. On the contrary, the system is designed to incentivize you to mix different schools according to the role you have in mind – which could be a canonical RPG archetype, that MOBA champion you really like, or a hero designed to overcome a specific challenge. Some abilities are affected by certain environments. 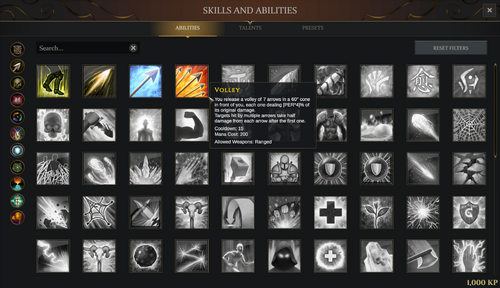 On Fractured, magical and combat abilities are discovered and learned through a unique process involving exploration, combat, gathering, crafting, and a little bit of waiting time (including offline time).

The aim in the design of this piece of the Knowledge System is to avoid grinding and to make it feel like any ability learned is a small adventure in itself – always familiar yet never repetitive, always worth following but never creating power gaps.

Initially, in the Character Abilities window, almost all the spells listed in each School are in an Unknown state.

Once an ability is Discovered, you get to know everything about it: what it does, what’s the cost to use it, and – mostly importantly – what are the tasks that have to be performed to be able to start studying it. Some examples of such tasks are:

Ability learning tasks never require you to repeat the same action for hours. Instead, they’re designed encourage you to explore and travel – rewarding cleverness and bravery, not time spent grinding.

All abilities have a total of 6 tasks associated to them, but it’s enough you complete 2 to turn the ability to 'Ready To Study – and that’s when the second part of the learning process begins.

Focus abilities are toggle abilities, but you can have at most 2 active at the same time.

Active channeling spells that do whatever they do until the player press the hotkey. They will have a gathering time of about 5 seconds that prevents you from spamming them. (for example, beams work this way)

And then, we have also channeled spells, in this case, the casting phase is not instant and both the gathering (in this case you will need just to make another attempt) or the casting process (here you will also lose mana or any other resource and the spell will go on cooldown) can be interrupted, causing the spell to end prematurely.

Some active racial abilities like Primal Form for example might have it's own button outside standard 8 button skill bar.